Previous Next
Difference Between R410A and R32

The Difference Between R410A and R32 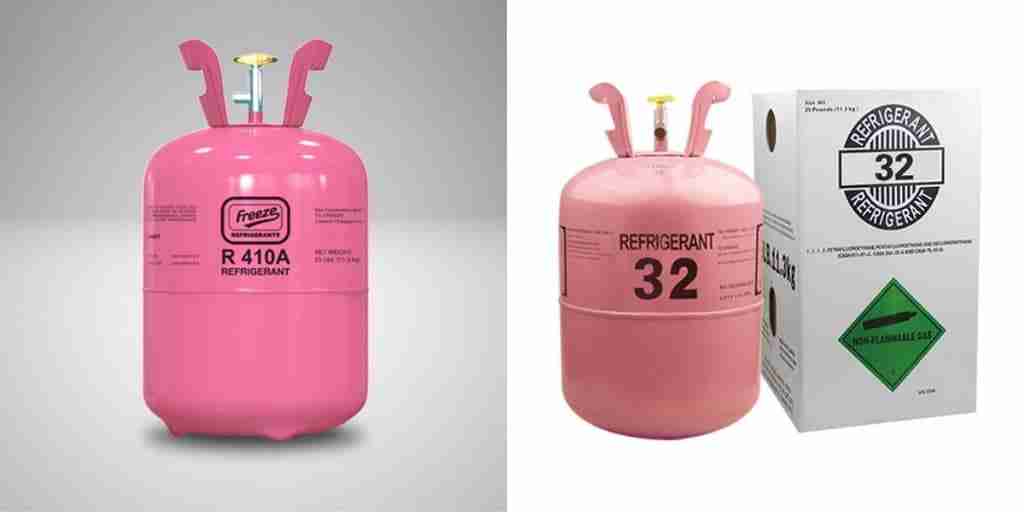 As if buying a new air conditioner isn’t already a tough choice, now we also have to decide between two different refrigerants as well. Of course, we’re talking about the well-established R410A and the newly introduced R32.

We use the term “refrigerant” to refer to several types of gases that we use as cooling agents in air conditioners and other similar devices. The gases are insoluble in water and can travel as far up as the stratosphere, thanks to different chemical reactions.

We differentiate between refrigerants based on:

What makes certain refrigerants stand out is their impact on our environment. For example, both R32 and R410A belong to a group of gases called hydrofluorocarbons. Their ODP (ozone depletion potential) is 0, which makes them eco-friendly.

Both refrigerants belong to the same group and share the same ODP.

However, in this article, we will discuss their differences.

Which one is better?

Let’s find out. But first, here’s some general information about these two refrigerants.

In 1991, an American company by the name of Allied Signal invented and patented the R410A refrigerant.

Five years later, the gas found its way into residential air conditioning units, replacing R22 in the US, Japan, and Europe.

In 2010, the US completely phased out R22. Since then, R410A has been the standard for all new air conditioners in the country.

Unlike other refrigerants, R410A operates at much higher pressures. Therefore, handling it requires the use of equipment that is suitable for such conditions.

Even though it consists of two different gases, it still has a constant boiling point. Because of that, refilling a pressure vessel with R410A should be relatively easy and without any leakage.

In contrast to haloalkane refrigerants, R410A does not contain chlorine or bromine.

Instead, the gas contains only fluorine, hence its non-existent ODP. That is the reason why R410A became widely available, replacing R22 in the process.

However, the latter largely reduces power consumption. Therefore, its environmental impact is drastically lower than that of R22.

R32, better known as difluoromethane, is an organic gas, much like R410A. With an ODP of 0, the two gases are also equally harmless to the ozone layer.

Still, R32 has a GWP of 675, which is significantly lower than those of R22 and R410A. That makes it a seemingly better alternative.

R32 performs well in terms of pressure drop and heat transfer. It’s a grade A2 gas, which means it is mildly flammable.

In spite of that, R32 has been successfully used for many years now, most notably in China, India, and Japan.

In order to mitigate the risk related to its flammability, experts recommend using heat transfer equipment that has a low refrigerant charge.

Interestingly enough, R32 is a component found in other refrigerants. For example, by combining it with R125 and R143a, we can create refrigerants R407A and R407B (through E).

R32 is also one of two gases that make up R410A, which we described above.

The Difference Between R410A and R32

Unlike R32, R410A has a low critical temperature, which in turn yields a lower coefficient of performance. Additionally, R32 is less dense than 410A.

That makes its amount smaller per one charge. Given that we measure GWP per kg, R32 affects the climate even less than its GWP suggests.

The two gases are also different in terms of their volumetric cooling capacity. R410A has a high VCP, which requires larger pipes.

Thus, it’s not as efficient as R32, whose VCP is significantly lower. Moreover, R32 has a higher pressure ratio than R410A.

Overall, R32 is much more efficient than R410A. However, it does have a few shortcomings as well, namely its high discharge temperature.

Because of that, it can break down the oil in the system, which leads to bearing seizures.

Fortunately, there is a way to limit the discharge temperature of R32 so that the system can function properly.

Everything we’ve said so far indicates that R32 is a clear winner of our comparison. Since R32 is a single-component gas, it is more convenient to work with and easier to recycle. Moreover, its low GWP and high COP make it the perfect candidate to drive R410A into obsolescence.

According to several reports, most countries intend to phase out R410A by 2025. Still, some people contest the claims that R32 is the refrigerant of the future.

Still, it all boils down to the type of air conditioner and aircond installation that you will be getting for your house.

They don’t deny its many benefits.

However, they do claim that R32 is just another step toward finding the ultimate eco-friendly refrigerant. Additionally, many people worry about the flammable nature of R32.

We hope that our article has shed some light on the differences between R410A and R32.

In the end, time will only tell which one takes the “eco-friendly cake.”

One thing for sure, all our air conditioner service include refrigerant checking.